The eyelashes were too uniform, and a heavier grade than the hair. It shouldn’t have bothered him, but he spent so much of his time seeing them up close. The eyes, however, were perfect. Expensive. Worth every cent. The fabricated recreation was, to him, breathtaking. Breath.

The chest rose and fell. The mouth opened a fraction on occasional breaths, though not to any rhythm; their polydimethylsiloxane lips sticking a moment as they parted. The breathing would sometimes sync with the motorised pulse of the heartbeat, but with enough organic disparity between the two for authenticity. He would slide his hand over the sternum and tingle from the sensation of these two mock-natural processes acting out within the torso; the hairs on his arm would stand up.

He lost Isaac eleven years prior.

Sarah had barely spoken at all the entire weekend. She went about her tasks and chores in silence, always within sight of Isaac, their son. The two of them were, in that time, identical; wordless, occupied, concealed.

Abe ate his breakfast alone, consumed the paper, sank into the couch, walked the dog. He peeked into the laundry room to ask if they needed a hand. Sarah jumped, minutely, and shook her head. Isaac just stared at him. He made a sandwich for lunch, watched the game, fed the cat. His wife and son spent the last of the daylight in the garden, together. He asked about dinner, what they were hungry for, but they weren’t. Abe told his son to come inside from the cold, Isaac stood, but stayed, for his mother held him by the arm. Sunday passed much the same. Before going to sleep, he checked in on his son one last time, who was deep in the arms of slumber. Abe recalls relief at the time, to enjoy that weekend virtually alone, and despises himself for being so unprepared.

Monday morning he woke up, showered, dressed, and went to work. Sarah wasn’t up yet, so Isaac wasn’t either. He didn’t hear from them all day; par for the course after sixteen years of marriage, but when left to reckon, he would always feel the chill of anxiety begin to creep down over him, as his own hot fury would harden and rise from deep in his guts to meet it.

He got home in the late afternoon. The paperboy had just finished his route for the evening edition. The lights were off and the house silent. No word. She took him, she took him. Abe stormed straight to his son’s room. Sarah’s body was holding Isaac close. The skin around their eyes and nose still glistened fiery pink, but the flesh was cold and still, doll-like to the touch. The note in Sarah’s pyjama pocket was short, the letters smudged and barely legible:

You can’t hurt him any more. 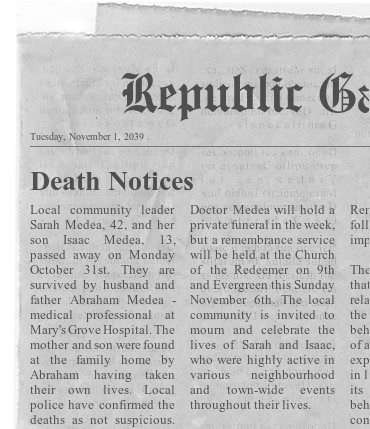 Abe sold the house the following spring. The family pets went south to live with Sarah’s parents, who were protective and simple folk, like she once was. They supported him through the months following his family’s passing, but hadn’t been in touch for a few years now, save for the annual Happy Thanksgiving and Merry Christmas cards. He couldn’t stand them, hated them.

He moved back to the city and hid himself from the world, which continued on outside of his quiet deliration. From the comfort of his loneliness, he sought. He did not know what he was searching for, until one day he found it.

Between his savings, the sale of the house, and the frugality of his insular living, he could afford it. The best. Top-of-the-range. Bespoke.

From the moment he placed his commission, his heart and every waking thought was set on one thing. For the next decade of waiting, nothing else existed, including himself for long spells of distraction. He sent specifications, photos, measurements; they replied with thank yous, updates, and promises. Weight, height, hue, touch, girth, scent. Every inch considered, studied, tested, and actualized; nothing neglected or left sacred. Nothing.

Five years into the project, during a regular progress review, Abe found himself standing in the boreal bosom of the robotics lab. He held a perfect, beating, warm replica of a human heart between his fingers, which shook with the frenetic delicacy of a moth in a lampshade.

It arrived in the fall of 2050, without ceremony. A notification, a knock at the door, and a signature.

The couriers carted the container into the spare room. It sat unopened for a day. Abe had kept some of his son’s possessions in storage over the years; toys, curtains, clothes, bedsheets. He needed a few hours to meticulously lay them out, to make the replication perfect. Among all the memories, there were no photographs; nothing that might prove a weak comparison and potentially shatter the illusion.

Night began its crawl into day. The muted brightening of the clouds awoke pigeons roosting nearby, whose muffled cooing reminded Abe of the old neighbourhood in the suburbs of another lifetime. His son’s alarm clock began to chirrup, as he had programmed earlier during the night’s preparations. Time to wake up.

But Abe hadn’t slept at all, and felt a film of grime clinging to him from his night’s endeavours. This wouldn’t do. He undressed, showered, even brushed his teeth. With the first stirrings of life beginning to pollute the air outside, he returned to the bastardization of his son’s old room and stood before his prize.

The brushed-metal front of the container slid off to the side, revealing its contents. The newborn android was suspended perfectly within its soft-form foam womb, legs straight down, arms up and out at right-angles to the body, like wings.

Abe was hesitant, but eventually began the primary boot sequence.

It opened its eyes silently, its gaze catching Abe’s instantly. After a few painful seconds, a negligible hum whirred-up deep within its body, which rose higher and higher until it met the general background noise of the urban sprawl outside, and disappeared. There was a weak gasping sound, and it was breathing.

Abraham approached, tears growing in his eyes, his whole body shaking and raw with the expectant eruption of long-suppressed salacity. His smile was so wide it pained his lips as it stretched over his teeth. He took in every facet of the thing.

Something was wrong. This is perfect, this is right, this is mine.